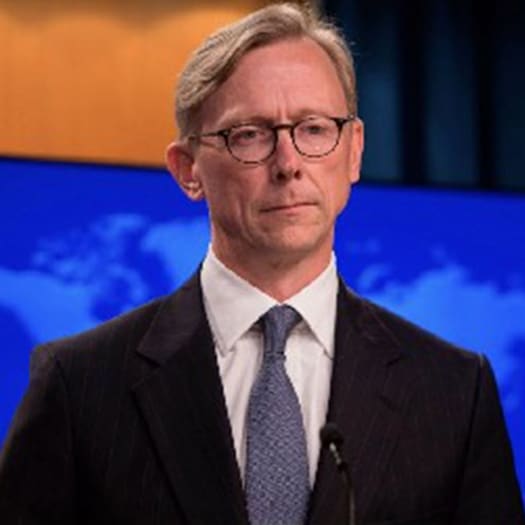 Former US Special Envoy for Iran

Watch Mr. Hook in a fireside chat on “Changing US Foreign Policy, at The Iran Conference.

Brian Hook has served in the administrations of three U.S. Presidents: President George H.W. Bush, President George W. Bush, and President Donald J. Trump. During the Trump Administration, he served as Senior Advisor to Secretary of State Rex Tillerson, Senior Advisor to Secretary of State Mike Pompeo, U.S. Special Representative for Iran, and Director of the State Department’s Policy Planning Staff. He was a key official on the team that negotiated peace agreements between UAE-Israel, Bahrain-Israel, Sudan-Israel, and Morocco-Israel, known collectively as the Abraham Peace Accords. He also led the creation of the Free and Open Indo-Pacific strategy and the deepening of bilateral relations between the United States and India.

Mr. Hook held a number of senior positions in the Bush Administration, including Assistant Secretary of State for International Organizations; Senior Advisor to the U.S. Ambassador to the United Nations; Special Assistant to the President for Policy at the White House; and Counsel in the Office of Legal Policy at the Department of Justice. From 2009 to 2017, he founded and managed Latitude, LLC, an international strategic consulting firm based in Washington, D.C. He was a corporate lawyer at Hogan & Hartson from 1999 to 2003.

Mr. Hook currently serves on the Board of Trustees of the Woodrow Wilson International Center at the Smithsonian Institution.