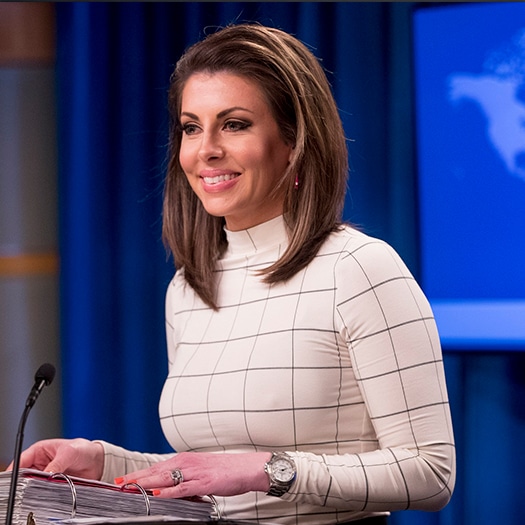 Watch Ms. Ortagus on the “Beyond the JCPOA: US Iran Policy” panel at The Iran Conference, here.

Morgan Ortagus is a seasoned business executive, distinguished public policy and communications professional, and an active U.S. Naval Reserve Officer. From 2019 to 2021 she served at the Department of State as the Spokesperson for the United States of America. In February 2021, Morgan joined Adam Boehler in starting Rubicon Founders, a leading healthcare investment firm.

A veteran of both the Obama and Bush Administrations, Ms. Ortagus was sworn in as U.S. State Department Spokesperson on April 3, 2019 for her third tour of duty in the executive branch. During this time, she worked closely with the White House on the historic Abraham Accords that brought peace deals between Israel and UAE, Bahrain, and Sudan. As Spokesperson, she developed strategic communications plans for every area of U.S. foreign policy. Traveling with Secretary of State Michael Pompeo to more than 50 nations, she coordinated messaging campaigns and responses to sensitive and high-profile foreign policy actions, from hostage negotiations to the U.S. campaign against Huawei’s 5G expansion in the West. She led U.S. government efforts to push back against sophisticated Chinese, Russian, and Iranian disinformation campaigns, and was instrumental in the United States’ determination of the Chinese government’s genocide against the Uyghurs.

In the private sector, Morgan founded Ernst & Young’s Geostrategic Business Group and was a Global Relationship Manager at Standard Chartered Bank in the Public Sector Group covering clients in Africa, Asia, and the Middle East. She pioneered a new political risk analysis suite for Ernst & Young’s largest corporate clients. Morgan was also the co-founder and Managing Director of GO Advisors, a National co-Chair of Maverick PAC, and a national security contributor at Fox News.