Washington, DC — On Friday February 1st, NUFDI met with Deputy US Assistant Secretary of State for Iran and Iraq Jennifer Gavito at the State Department. In the meeting, members of the NUFDI team discussed four main issues: the necessity of hearing voices from inside Iran, the imperative of making human rights and democracy promotion the pillars of America’s Iran policy, the importance of the American government speaking out on the Islamic Republic’s crimes against humanity, and the value of publicly engaging the Iranian-American community.

NUFDI presented Deputy Assistant Secretary Gavito written statements from prominent activists inside Iran calling on the United States to support the Iranian people’s democratic aspirations, reputable polling data showing that an overwhelming majority of Iranians oppose the Islamic Republic and favor a secular democratic government, and recently-leaked IRGC documents forecasting significant future protest activity in Iran. They also expressed their view that the ongoing Nuclear-related negotiations in Vienna disregard the Islamic Republic’s historical record of, and continued engagement in, human rights abuses and international terror and therefore should not proceed until such issues can be incorporated with the scope of the discussions.

NUFDI remains committed to its non-partisan mission of engaging both sides of the aisle in promoting a US foreign policy towards the Islamic Republic in Iran that is based on American values of human rights and democracy.

NUFDI is a non-profit, non-partisan organization engaging Iranian-Americans to promote a US foreign policy towards Iran based on human rights and the promotion of democracy. 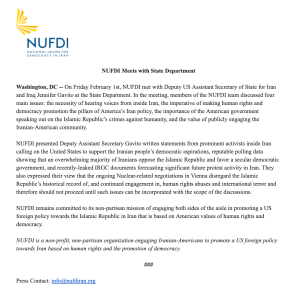