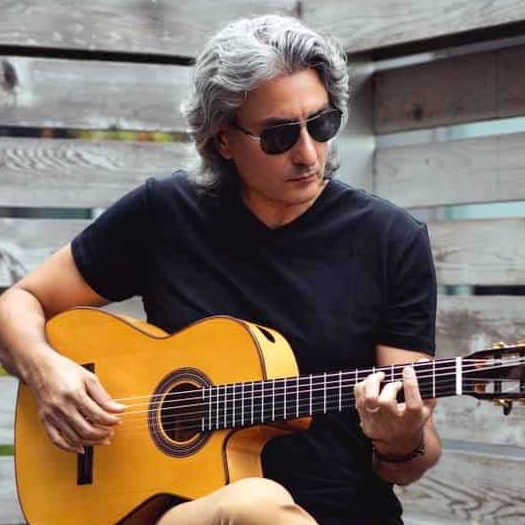 Babak Amini is a highly talented and accomplished Iranian, Canadian musician composer, guitarist, and a member of American Guitar Society. Born in Iran in April of 1970, Babak was educated in the United States and has since lived between the States and Canada.

His first experience of music at the age of ten was with his mentor and renowned teacher Mr. Shahrokh Partovi and inspired his Flamenco style. He then developed an appreciation for the guitar under the tutelage of master Simon Aivazian. Babak began working as a professional musician at the age of 18 and his first album ‘Gray Rain’ was introduced in 1990. It was followed by ‘Blue of the Rain’ and ‘Shadow of My Own’ with vocals based on poets such as Hafez, Molana, Babataher and Nima.

In addition to his own albums, Babak has worked with other talented musicians including as musical director and band leader for Googoosh, Faramarz Aslani and Ebi. In addition to being a lead composer to artists such as Darya Dadvar, Rana Mansour, Sogand, and many others he leads the Babak Amini Jazz Trio and has performed in some of music’s most esteemed venues including Royal Albery Hall, Wembley Arena, and the Queen Elizabeth Theatre.

Babak has been involved in many charity events such as performing for fundraising concert for the devastating earthquake of Bam, Iran, in  2002 with other Canadian and Iranian musicians at the Toronto Center for Arts. He also headlined NUFDI’s Norooz Gala as star performer.

To inspire new musicians and younger generation to pursue their dreams and talents in music, through his career Babak has always transferred his knowledge and style by tutoring talented students. He has also collaborated with many local and anonymous bands, including those underground in Iran, to inspire and encourage them.

Currently Babak Amini is band leader and musical director of a one-of-a-kind world tour with Shahin Najafi. The tour is a unique socio-political commentary on the current state of Iran. The performance will blend Shahin Najafi’s musical talents with band conductor Babak Amini’s guitar-playing, musical vision and compositional abilities to create an unforgettable experience. For more information on Tour Sigma and for ticket information, click here.